And it’s not just the usual END_OF_DOCUMENT_TOKEN_TO_BE_REPLACED

The NAHB (National Association of Home Builders) Eye on Housing out late last week included a chart of 5+ unit apartment building construction and absorption in the US. Built with the latest data from the Census Bureau’s SOMA (Survey of Market Absorption of Apartments, xls available here) is shows that absorption is holding in around 65% even while construction of new units is picking up: 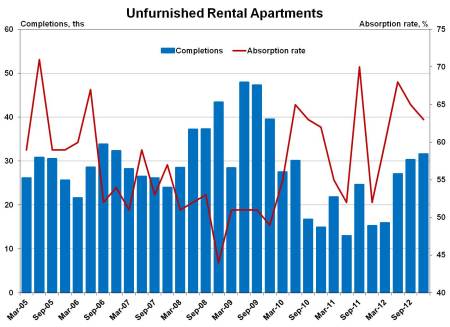 The job growth isn’t distributed evenly across the US however. In the chart below from Axiometrics’ latest Jobs Report we can see which metros are END_OF_DOCUMENT_TOKEN_TO_BE_REPLACED

The NAHB was out with their weekly Eye on Housing report and this week’s edition took a look at the Q3 SOMA data from the Census Bureau. SOMA stands for Survey of Market Absorption of Apartments and overall things are looking pretty positive for developers. One interesting chart they had showed the types of properties that were being built since 2005:

Condos and co-op deliveries are END_OF_DOCUMENT_TOKEN_TO_BE_REPLACED

Dividend Capital’s Q3 Market Cycle Monitor Report is out and naturally I looked at the apartment building investment cycle chart first. Specifically these days I’m looking to see where the author, Glenn R. Mueller Ph.D. has placed the Seattle market in the cycle. 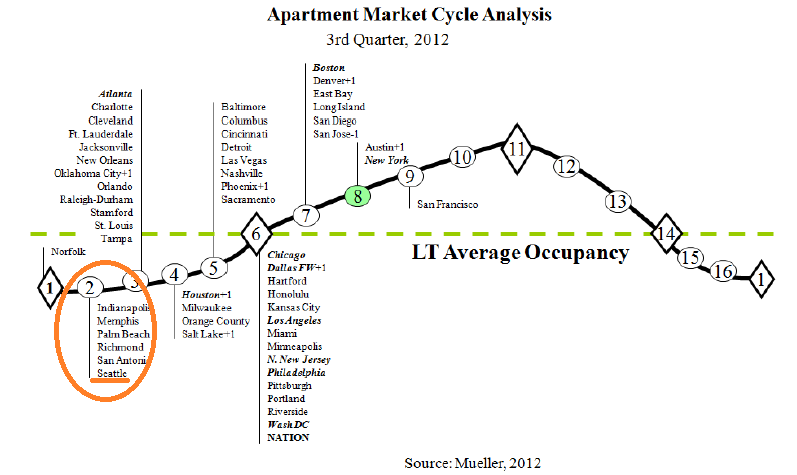 In this latest report you can see that it is listed at position 2 with only Norfolk listed lower at position 1. What does position 2 signify? According to the good Doctor, position 2 lies in the Phase 1 – Recovery Quadrant defined as having “No New Construction” and position 2 specifically having “Negative Rental Growth”. But how can this be? END_OF_DOCUMENT_TOKEN_TO_BE_REPLACED

The NAHB is out this morning with a chart that gives some perspective on apartment building investment starts. The Census Bureau reported 285,000 unit starts in October for 5+ unit buildings. At that rate it looks like we’re just returning to what was a sustainable level of starts in the ’97-’06 period. 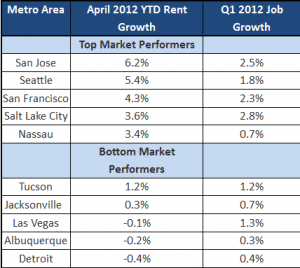 Report on the state of apartment building investment markets from the good folks at Joseph Bernard Investment Real Estate in Portland:

Continued positive multifamily demand fundamentals and ready access to capital at attractive rates is fueling a surge in new apartment development, according to industry executives.

Several hundred senior-level apartment executives gathered in Scottsdale, AZ, last week for National Multi Housing Council’s (NMHC) Apartment Strategies/Finance Conference and Spring Board of Directors Meeting. The following is the NMHC’s summary of what was discussed.

Continued low levels of new supply have led to a big bounce-back in rents as demand outpaces new construction. According to one panel of apartment executives, the new supply shortfall may be larger than once thought — as many as 700,000 to 1 million units — because many of the apartments built in recent years have been in the affordable, rather than market-rate, section of the market. Moreover, much of the current apartment stock dates back to the 1970s and is becoming obsolete, creating additional demand for new supply.

Select areas have seen such large upticks in the number of planned and under construction units that could turn into hot spots for potential overbuilding. In particular, certain submarkets of Phoenix, Seattle and Washington, D.C., appear somewhat at risk.

But, overall, new completions are still a very low percentage of total inventory.

There is a wall of private capital that wants into the multifamily space. More than 250 private equity funds currently are END_OF_DOCUMENT_TOKEN_TO_BE_REPLACED