Apartments are a little easier to come by in the Portland area, but that’s not slowing down rent increases across much of the market.
According to the Metro Multifamily Housing Association which released its latest survey Wednesday: 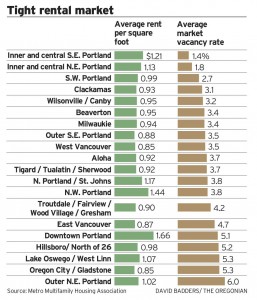 The Portland area has one of the lowest rental vacancy rates in the country. Last year Portland ranked second-tightest rental market among the larg metro areas. That’s good news for owners of apartment buildings, who can push rents higher without risking empty units.

But the clock is running. High demand for apartments has drawn interest from developers, and Johnson said some 6,100 units are in the works. The bulk of those new apartments are still months or years away. Only 1,700 units will come to market this year, with another 2,700 on track to open in 2013. That lags the region’s 15-year historical average of 4,000 new units a year.

Where do you think PDX is in the Apartment Building Investment Cycle?