At a Seattle apartment building investment conference recently one of the main speakers was saying that everyone who’d ever held a hammer, and their brother, was trying to build apartments in that market. That really struck a nerve in my market cycle conscious brain and was looking to get some perspective on that when a CBRE piece crossed my desk with this chart on it: 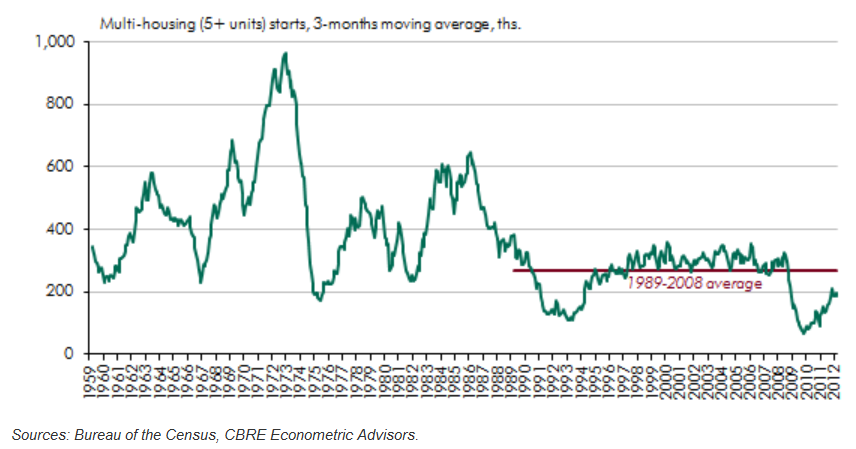 So while new unit construction starts are up significantly from the 2009 lows they are still well below the 89-08 average of about 250k. More importantly in relation to demographics we will be seeing increasing demand from growth in two of the prime renter groups, my exec sum from the piece below:

Three trends will be particularly relevant to apartment building investment and construction:

Changing age demographics will also have a major impact on income distribution and subsequently the price profile of the product.

The overall impact on future apartment demand growth is the bulk of it will be concentrated in the lower end of the price spectrum and the share of high-end product will be higher than in the past.

About two-thirds of these households earn less than $50K a year and 12% have incomes greater than $100K. A scenario where multifamily demand stabilizes near its long-term trend of 250 thousand units implies that the portion of high-end product should be about 30,000—including units for rent and for sale. If indeed most of the recent apartment building development is represented by high-end product, and this trend continues, it will become a reason for concern very soon.

See all the charts and the rest of the paper here: http://www.cbre-ea.com/default.aspx?_title=AboutRealEstate&_id=3097