In his latest Ahead of the Curve piece, Richard Barkham, Ph.D., CBRE Global’s Chief Economist explores whether the commercial real estate cycle turns down in 2018 or  extends beyond for a year or two. His conclusion is a version of Harry Truman’s dreaded ‘on the other hand…’ but in his defense I would point out that John Kenneth Galbraith said; ‘There’s only two kinds of forecasters, those who don’t know, and those who know they don’t know’. Barkham is clearly in the second category… in the good way.

Before we get to that part however I want to focus on a larger issue that the piece begins its Ends in 2018 rationale with: The average length of a cycle. The standard trope is trotted out about the average post-war cycle lasting 7-8 years but this has not been the standard post-war recovery for a very important reason: The Great Recession/Financial Collapse/Mortgage Fraud Bubble/(insert your label here) has had no comparable downturn to measure against since the end of WWII. For that you have to go back to the Great Depression and everyone who ignores that fact is in danger of using the wrong measuring stick when forecasting this cycle.

When you hear statistically speaking, the cycle… remember also that ‘the cycle’ is construct born partially from our very human need to see order and predictability in the universe and that the cycle, not being self-aware, has no idea whether it is average or not (if it was self-aware of course it would suffer from the Lake Wobegon Effect).

Now I’m not saying that the cycle will go beyond 2018 I’m just saying that there are no statistical constraints that will cause it to turn down next year. There are some valid reasons listed why it might: Rising rates, QE about to be reversed, stock market stretched, etc. so it could happen.

On the other hand… there are good reasons to think it will go beyond: Inflation low, excess capacity remains in the global economy restraining wage growth (and limiting rate increases), currency rate differentials, etc. In the end Barkham advises to focus more on the supply (how much is being built) than the demand going forward.

So what about the Apartment Investment Cycle?

For the apartment cycle in the US there is a very different dynamic driving the length of the growth phase and that is demand. In 2015 I did a piece The Apartment Market Cycle Peak Is Here, It’s Just Not Evenly Distributed Yet where I showed that the US apartment investment cycle was likely to be extended:

There I talked about the three types of apartment demand (applies to CRE as well): Demand from tenants, investor demand and deal demand. Deal demand is created by brokers and lenders who only get paid when a transaction closes. Brokers are a more or less constant force but lenders tend to wax and wane. Back then banks were shifting into high gear, since the beginning of the year though it seems that banks have been pulling back or at least tightening their underwriting. There are plenty of alternative lenders however and they’re ready to pick up the slack from banks. (If you’re looking for capital shoot me a message)

Investment demand is still rampant because in a 2.50 T10 world there’s a planet full of capital dying for yield.

Imagine you are on the board of a pension fund and need a 7-1/2% annual return to fund your liabilities. Twenty years ago you could have hit that number with a 100% fixed income portfolio, in 2005 you could be no more than 52% bonds and now look: 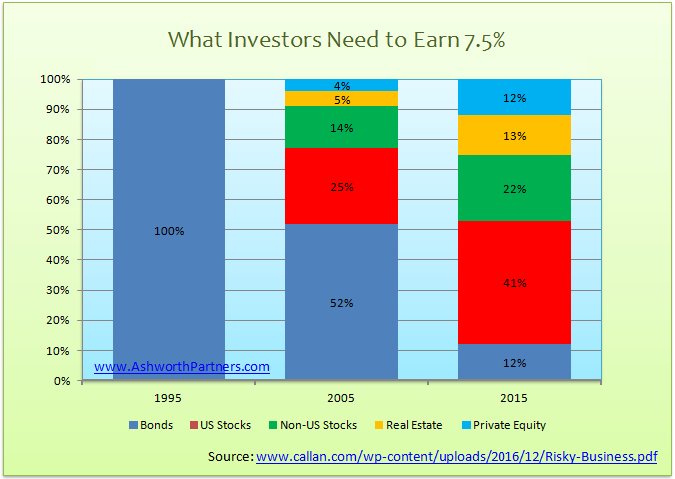 Now you need more real estate than bonds! That’s according to Callan Associates (one of the largest pension investment consulting firms in the US) in a report out late last year.

If you take the global pension assets tracked by the OECD, $38,000,000,000,000 (38 Trillion with a T) and move 13% into real estate you can see how that might create some demand. US pension assets alone are about $18T, 13% of which would be $2.34 Trillion and even that would significantly move the needle on demand. Granted US public and private pensions already hold about a trillion dollars of real estate, but even then they’ll have to more than double their stake, equal to buying up every piece of real estate in NYC to get to the target allocation. That’s just pensions, who only hold 34% of the institutional real estate in the US:

Keep in mind also that a lot of the $20T non-US pension money would like to own more real estate in the States too. So there is a ton of demand. Does that mean we’re about to build whole ghost cities of apartments to nowhere?

Fortunately not in the immediate future at least because the third piece of demand, that of tenants wanting a place to live is much stronger and will continue longer than most people imagine.
According to new research just released by the NMHC we will need four and a half million more units in the next dozen years or so to keep up with demand that demographers can already see is on the way. That works out to 328k new units per year and the report points out that we’ve only been building 225k on average over the last five years. This doesn’t include replacing any of the stock which reaches obsolescence.

Note that this is another place where ‘average’ can mislead. Many times the average new units is misused when the amount in any one period are compared to the average new units over some time span. This is because the effect of new units in a market depends on their relationship to current demand, not how many were built on average back when. In this particular case because the average number of new units delivered over the last five years are being compared to anticipated demand the number is actually useful in projecting a shortfall/oversupply.

Proprietary research we did for a client in 2014 (that can now be made public, and will be after it’s updated) showed that the ‘demographic tailwinds’ as they were termed are and will be more persistent than many housing experts, especially in single family, expect.

The themes may be familiar; millions of families foreclosed on, loss of jobs and the rise of long-term unemployment, stagnating or declining incomes, tightening lending standards*, spiraling student debt, delayed marriage, the resurgence of urban living, the sharing economy etc. but underlying many of those symptoms is the central thrust of what we found.

Similar to the way you don’t trust ‘solid ground’ the way you did before experiencing an earthquake, the psychological scars of enduring the Great Recession have fundamentally changed the way many people feel about the security/advisability of being tied to a thirty year mortgage. This is especially true for younger people who would in other times be in their prime home buying ages. If you grew up watching your parents, neighbors and friends losing their homes, jobs and retirements it would ‘leave a mark’ on your psyche.

Combine that with the political, economic and societal uncertainty that we’re experiencing in passing the peak in the generational cycle and you have a recipe for increased apartment demand that will absorb a lot of new construction… if it gets built.
The biggest challenge is to figure out how to build class B apartments profitably so that larger demand cohort can be met. If you’re interested in how that might be accomplished we should chat.
*If on the other hand the administration succeeds in unwinding Dodd-Frank we’ll be returning to those thrilling days of yesteryear in the wild-wild West of mortgage lending and the boom & bust cycles will come and go much more frequently.

2 thoughts on “Are We Looking At An Extended CRE Cycle? What About Apartments?”