As you can see, that one week the spread was also well below its six month average while the T10 got as low as 2.15%, territory it hadn’t seen since the middle of June 2013. We finally got some updated numbers on the ULI rate which would have been nice to have in real time as it was stepping down consistently for six weeks starting in the middle of September, foreshadowing the fall in the 10yr loan rate. If your research budget is big enough you can get the data feed from Trepp who provide the numbers to the ULI.

Speaking of the ULI, I was reading the latest ULI/PwC Emerging Trends in Real Estate (PDF which I highly recommend)  and in the Capital Flows section they quoted one CEO participant saying: “My only concern would be that people are still fairly disciplined . . . at this moment. But the debt side may be on the verge of becoming too aggressive.” This lead to a discussion of a chart from the American Council of Life Insurers (ACLI) and their take on risk premium in commercial real estate loans: 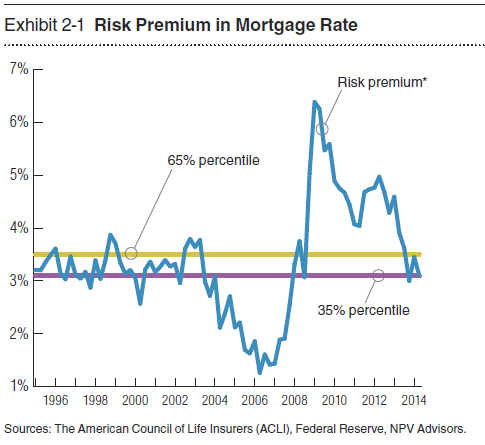 It turns out the the ACLI’s risk premium is the difference between the loan constant on all their loans less the 7 year Treasury rate, not unlike the spread we track on our chart above.  Since they’re including the whole range of loans they make, presumably including acquisition and development (A&D) loans the shorter Treasury rate makes sense. Using the loan constant instead of the actual rate is interesting, maybe to do with adjusting for different terms or amortization periods across all the loans(?) Would like to hear your thoughts and I’ll be rolling that around on a spreadsheet to see if that shows us as apartment investors anything helpful.

Quick Review: The loan constant is the percent of the original loan amount that you make in payments, including the repayment of principal. For instance on a $1,000,000 30 year loan at 4% interest, the annual payment would be $57,830 or 5.783% of the million which also gives the Loan Constant of the same percent.

They figure that anywhere between the 35th and 65th percentiles of the twenty year average is ‘normal’ and getting outside of that band is an indication of insurance company lenders being too easy below the band and too risk adverse above it. If you have any insight on this I would appreciate hearing your thoughts.

They also had a couple charts showing that the consensus believes that even more money, both debt and equity, will be available to real estate investors this year than last from all the typical sources: 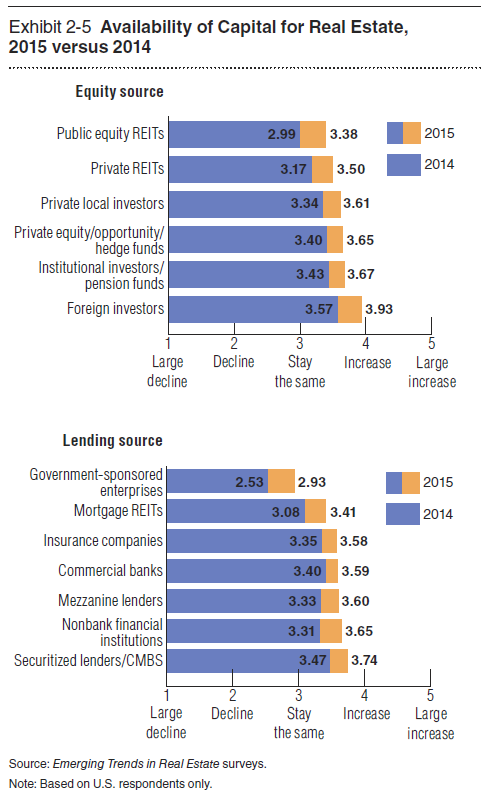 Also in the last few weeks the Fed is out with their quarterly survey of senior lending officers‘ read on both lending standards and demand. On the demand side for CRE and apartments specifically demand continues to be strong: 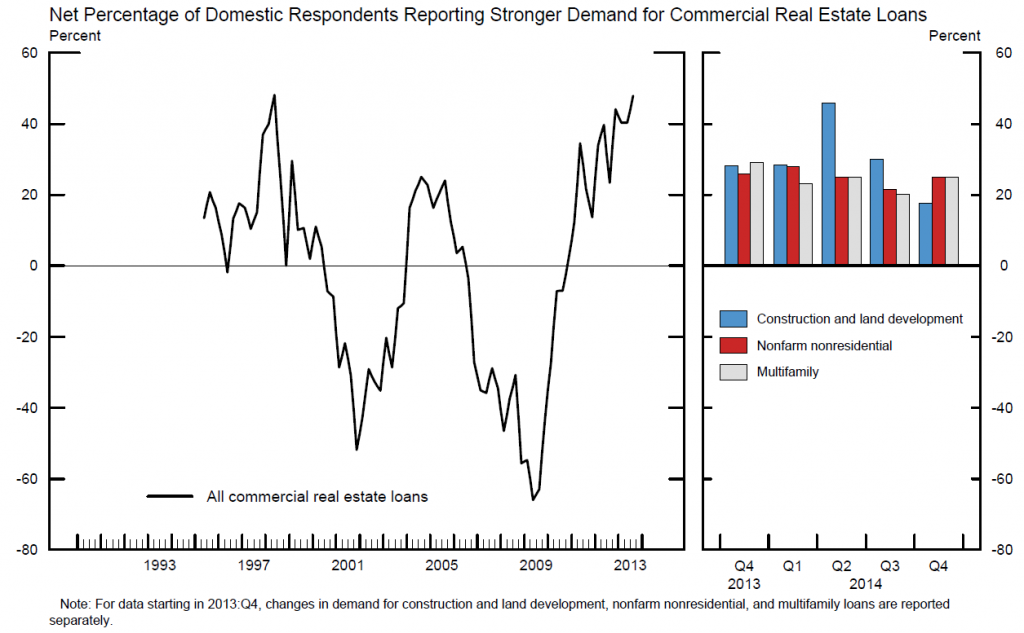 You can see increased demand for apartments and other commercial property loans holding steady while demand for construction and development loans has been slacking off since the beginning of the year. Interestingly, lending standards for those loans has been loosening as well: 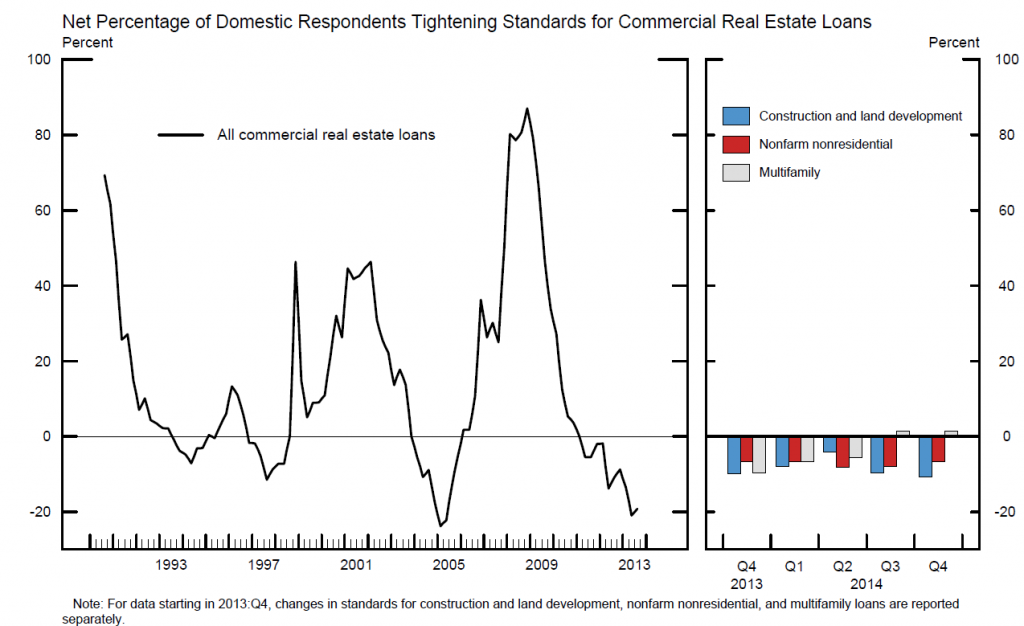 Maybe that’s a good thing now that other commercial real estate sectors are picking up but I’m afflicted with recency bias and looser money for development makes me nervous… and of course I’m talking our book since we’re investors in existing properties much more than developers of new product… at least for now. More on that as it develops. Sorry couldn’t resist the pun.

Last month I mentioned that we’d been tracking a 15 year fixed rate loan from a lender we follow and had noted that the rate was consistently below the 10 year fixed loan we track and I thought is was weird in an inverted yield curve/contango kind of way. Well it turns out that the 15 years is not just the interest rate fix but it’s also the amortization and term of the loan so mystery solved and my bad for not picking that minor detail up sooner. How minor? Well that million dollar 30 year loan at 4% that I mentioned above whose annual payment was just over 57.8k would jump to just under 90k on a fifteen year am which represents a more than 55% increase in annual debt service- D’oh! I should have READ THE FINE PRINT tattooed on the inside of my eyelids for that miss.

The other (not so embarrassing) thing about that 15 year rate is that we were going to add that to our tracking chart which we post every month but as it turns out it’s just a shadow of the 10 year rate. Back when it was first launched there was a tiny gap between them one week or another but since then it’s literally been just a shadow. Based on that we’ll keep the chart cleaner and easier to interpret by leaving off the 15 year rate, at least until they diverge enough to be newsworthy.

About the T10 and the apartment building rate we track, the green line on the chart represents the six months trailing average spread. We track changes in the trend for signs apartment lenders becoming more or less competitive. Note that since rates are only quoted on business days the chart averages the last 120 business days which equates to roughly six calendar months.

We track the 10 year Treasury (T10) because that is the benchmark most lenders base their long term rates on. In order to lure investors away from Treasuries to buy mortgage bonds lenders have to offer a premium (AKA ‘spread’) over what can be earned on the Treasury. So when the T10 moves, rates on all kinds of longer term loans including on apartments tend to move also. As you can see in the chart, the spread also widens and narrows as market forces make an impact.

The other rate we track is the from the Trepp survey which the ULI (Urban Land Institute) reports on. According to the ULI the Trepp rate is what large institutional borrowers could expect to pay on a 10 year fixed rate, less than 60% LTV loan for a “crème de la crème” core property located in a gateway market. We track this rate as a barometer of what the largest lenders are offering their best customers on the most secure loans for any advanced warning about future rate and spread changes. Note that the spread we chart is between 10yr loan we track and the T10.