The math behind RMS (if done correctly) can definitely drive rents higher if it’s backed up by enough data to draw statistically valid references. At its END_OF_DOCUMENT_TOKEN_TO_BE_REPLACED

While the ULI rate works its way south, it seems like 4.5% is the hard boundary for the END_OF_DOCUMENT_TOKEN_TO_BE_REPLACED

In more good news for apartment building investors, both the 10 year Treasury and apartment loan rates have moderated since the Fed’s “non-taper” announcement in mid-September. The spread between the T10 and the 10 year apartment loan rate we track has come in as well. Since 9/16 the Treasury has drifted down from 2.88% to yesterday’s quote of 2.53% while the loan rate has moved from 5.282 down to 4.921, bringing the spread in to 2.381 from 2.402. The average spread for 2013 has also narrowed to 2.573%:

Notes about the apartment END_OF_DOCUMENT_TOKEN_TO_BE_REPLACED

Just after I hit Publish on the top markets for population and job growth piece called: Skate to where the apartment building investment puck is going I found a great Richard Florida Atlantic piece for this month’s edition called The Boom Towns and Ghost Towns of the New Economy looking into the changes of fortune for US markets since the crash five years ago.

The recovery has been good (What crash? good in a few) in some areas, seemingly non-existent in others and in many a slow grinding process that has yet been unable to return to pre-crash levels. The first thing that everyone should look at is job growth but Florida looked deeper into High Wage growth around the country:

And then looking forward into END_OF_DOCUMENT_TOKEN_TO_BE_REPLACED

This means that the monthly payment on a $1,000,000 apartment building investment loan with 30 year amortization would rise from END_OF_DOCUMENT_TOKEN_TO_BE_REPLACED

Mike Scott of apartment research firm Dupre+Scott has some shocking news for apartment building investors. While most lenders require a minimum reserve of $250 per unit per year for capital expenses and many owners reserve up to 400, according to actual expense budgets Mike tracked for properties in the Seattle area actual capital expenses have been averaging $750 a year for the last dozen years and the trend is definitely up: 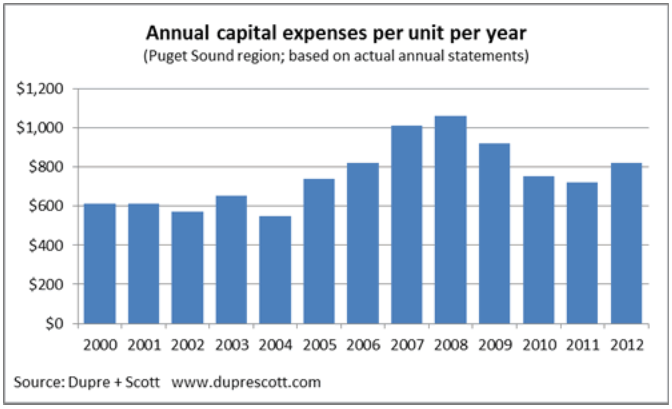 These are actual CapEx expenses from actual properties and while they definitely vary from market to market, the cognitive error is probably about the same everywhere. Some investors may say well we only buy newer properties so that we don’t have CapEx to worry about. Unfortunately their research shows that even END_OF_DOCUMENT_TOKEN_TO_BE_REPLACED 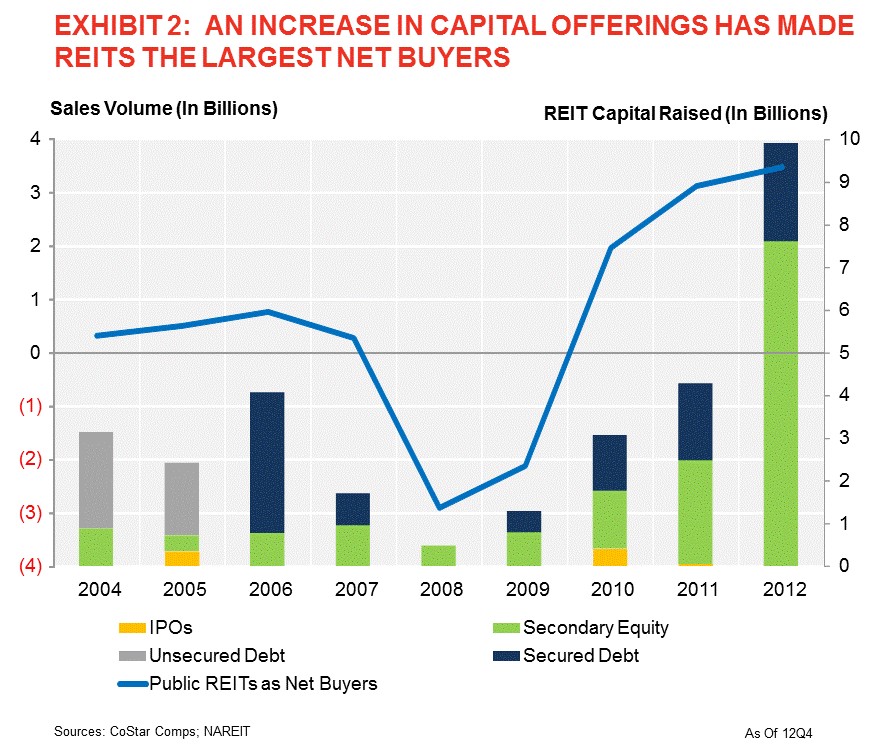 Last year REITs raised 15x the equity they did in 2008 (and 20x the total capital). Up against pockets that deep END_OF_DOCUMENT_TOKEN_TO_BE_REPLACED

… A number of major metros

CBRE Econometrics is out with a new report showing population growth trends in major US metros has shifted towards urban centers since 2010 but apartment building investors have been keeping pace (or exceeding it) with new construction.  Author Gleb Nechayev, Senior Managing Economist lays it out nicely in a series of charts:

Raleigh is the only metro with significant urban vs. suburban population growth. Note that one-county metros such as END_OF_DOCUMENT_TOKEN_TO_BE_REPLACED

As reported by CoStar: “Given that the multifamily market’s reliance on the enterprises has moved to a more normal range, to move forward with the contract goal, we are setting a target of a 10% reduction in multifamily business new acquisitions from 2012 levels,” Edward DeMarco, acting director of the Federal Housing Finance Agency (FHFA) said. “We expect that this reduction will be achieved through some combination of increased pricing, more limited product offerings and tighter overall underwriting standards.”

While 10 percent doesn’t sound like much, Fannie Mae and Freddie Mac combined to finance about $62.8 billion in multifamily deals last year, meaning about $6 billion in liquidity will END_OF_DOCUMENT_TOKEN_TO_BE_REPLACED