Wrapping up in the office on this last day of 2013 and wanted to share some things that have been twitching my antennae lately:

While there’s been a lot of ink/bits spilled over a slight and possibly temporary ‘taper’ in the Fed’s bond buying spree known as QE to Infinity! the one thing they have been unequivocal about is their intention to hold interest rates low (read: near zero) for an extended period that has now been stretched out as far as 2017. Meanwhile ‘everyone knows’ interest rates are going up.

Which will prevail? The Fed has been pretty successful at forcing them down and holding them there for years, going on 14 if you start counting from the dot com crash. On the other hand if everyone knows rates are going up they will act accordingly and that will tend to push rates up, at least long rates which the Fed has less control over. For a very interesting take on how to deal with what ‘everyone knows that everyone knows’ see Ben Hunt on Epsilon Theory.

What does it mean for us as apartment investors? If ‘everyone’ is right and longer rates, particularly the 10 year Treasury rise, apartment loan rates will go up making properties harder to pencil which will eventually raise cap rates… and lower values. If your strategy is a short term hold you could be having to sell into a rising cap rate market which could limit returns.

On the other hand (which is why Harry Truman longed for a one-armed economist BTW) if your strategy is to be a long term hold and you’ve locked in low rate fixed financing things will work fairly well. Since rising rates will make things more expensive, especially since everything’s leveraged these days, rents will trend higher with NOI following to the extent expenses can be controlled. Meanwhile the tenants are paying down the mortgage. NOI up, debt service fixed therefore cash flow up and equity up as well over the long term.

On the other other hand, if the Mandarins at the Fed succeed it could be a whole different ballgame. If we are turning Japanese and about to lose a decade (Japan’s 失われた10年 or Lost Decade is at 24 years and counting) interest rates could indeed be held down for a lot longer than four more years. If Ben Bernanke’s secret battle has been fighting off deflation which is what made the Depression so depressing then turn everything you’ve learned since the 1940’s on its head.

Whether Ben’s fighting the last war or not remains to be seen but if that is the case then low leverage, high debt coverage, low BER properties that cash flow nicely right now out the door are the way to go.

Another thing I’ve been hearing from multiple sources is that many professional stock market traders have their fingers over the sell button waiting for the slightest sign that markets are running out of gas. While Lynyrd Skynyrd was asking for three steps towards the door, traders are said to have one foot already out the door. And not without reason as the Shiller CAPE ratio is now at 26.4 which is about 62% above its long term average of sixteen and change.

A PE ratio of 26.4 means you would have to pay almost twenty six and a half years of earnings to buy the stock and to put that in real estate terms is equal to a cap rate in the high 3% range. Wanna buy an apartment building in Vancouver BC right now? Want to pay that much for a stock whose profits are at record highs and are horribly mean reverting?

And it’s not just me, Andrew Garthwaite at Credit Suisse said (Back in November when the CAPE was at only 24): “We note that markets are typically most vulnerable when the Shiller P/E is above 26x“. Throw in very low levels of bearish sentiment and super high levels of margin debt and Wall St. could turn bloody in a heartbeat. Black Monday and Tuesday have already been taken but that leaves three more trading days to earn the monicker.

The good news is that the smart money is probably looking to go elsewhere right now so polish up your offering docs and get pitching, crowdfunding, or whatever you call doing a crowdfunded raise. Which leads me to my last item, I was talking to a potential client located in Salt Lake City about which apartment markets to focus on. They’d been approached by someone pitching bus tours of apartment properties in the Dallas area (how to know when a market is getting frothy) so I asked why not look closer to home? Then showed this chart from real estate economist Elliott Pollack (http://www.edpco.com/content/default.aspx): 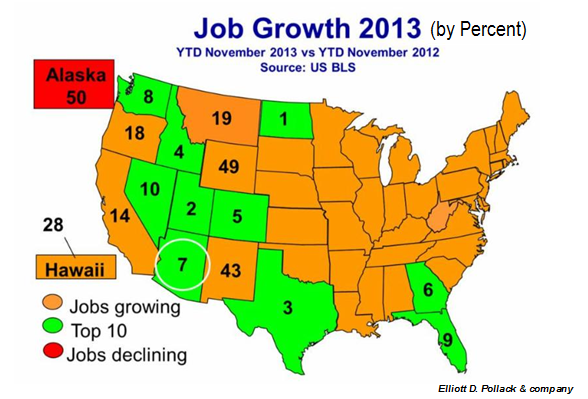 Granted Texas has the third best job growth rate in 2013, but Utah is #2. Why fly to Dallas to find a property when there’s probably a market you can drive to that will offer good returns. Or as Dr. Peter Linneman quoted from one of his more humorous partners: “I’ve invested in real estate in fifteen different countries around the world during my career and I’ve found I don’t have to go that far away to lose my money”.  The other reminder is that apartments are a game of singles and doubles like Tom Barrack says, so be in it for the long term wealth. If you’re looking for a home run go leveraged long Greek government bonds hoping for a 250bp bounce; oh wait, that’s what Corzine tried to do at MF Global.

2 thoughts on “Apartment Building Investment in 2014, opportunities among interesting times”