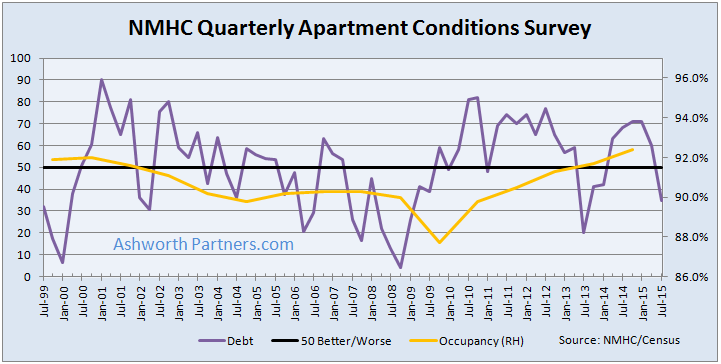 The National Multifamily Housing Council’s NMHC Quarterly Survey is out now and three of the four categories held fairly steady but the availability of  debt financing dropped twenty five points from sixty to thirty five. A reading below fifty indicates worsening conditions and the report on the survey said that with Fannie and Freddie nearing their lending limits things are tightening up. Note that the Debt category is the most volatile of the four with its average move being fifteen points from one quarter to the next. 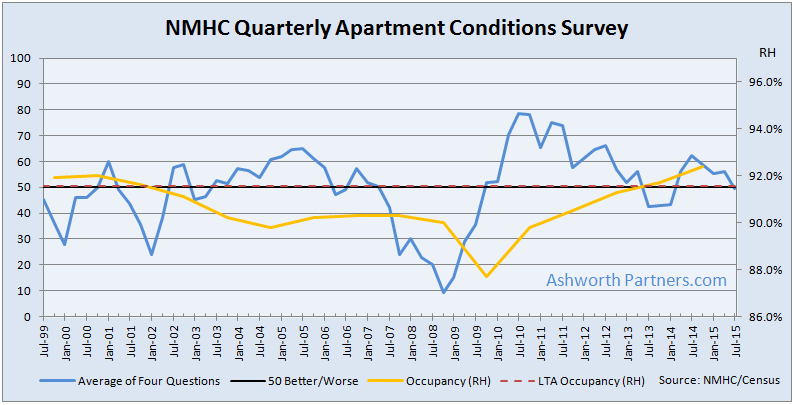 Overall the average of the four categories is right on fifty in this latest survey indicating so-so conditions for apartment building investment. Market Tightness moved up three points to sixty one, Sales Volume rose one point to fifty three and Equity Financing fell to forty nine from fifty five indicating that equity partners are less enamored with apartment deals than earlier in the year.

Also charted is occupancy and the Long Term Average (LTA) Occupancy because occupancy is the biggest driver of the apartment market cycle. Nationally occupancy didn’t rise above its thirty year LTA until July of 2013 after spending the previous eleven or so years below it. For more on occupancy and the apartment market cycle see 3 Things I Learned Charting Apartment Building & Commercial Real Estate Market Cycles from earlier this year.

Later this week we’ll have our monthly look at where apartment loan rates are for smaller, non-institutional sized properties.