The math behind RMS (if done correctly) can definitely drive rents higher if it’s backed up by enough data to draw statistically valid references. At its most basic level it should look like this:

To put some numbers on that look at the following table. For example, 20 leases are expiring and it may be possible to raise rents $100 but at that level there will be move outs which are estimated to be 25%. What is the net change in revenue?

In this example even if 25% do move out and your per unit turnover cost is $4,000 revenue is up 4k which if you can get it down to NOI is worth $66,666 at a 6 cap, a very reasonable assumption in many markets today.

But there is another way to increase annual revenue by four thousand: 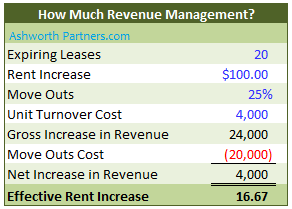 Raise rents by 17 bucks and have no move outs. I know it looks better to show that your rents are $100 higher than only $17 (if you can gloss over the higher vacancy and turnover costs) but tenants are not just commodities, if you treat them right they can also be evangelists for your property. In case you were absent that day see Guy Kawasaki: How to Drive Your Competition Crazy  (on Amazon).

Loyalty Zero cuts both ways and the rats will abandon ship just when you would really like them to hang around. These days you have to work at making your residents evangelists because if you just treat them like walking cash machines word will get out: 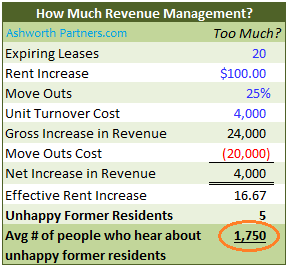 The average person on Facebook has 350 friends so in our example if we create five unhappy former residents more than seventeen hundred people are pretty likely to hear about it and form an opinion about your property. And that’s if none of them talk to anyone else too. Heaven forbid you make an unhappy camper of a former Gen Y resident:

Make five Gen Ys unhappy and you’re staring down the barrel of more than 3,200 people who aren’t too interested in becoming a cash machine for you. So maybe check dear Mrs. Johnson’s Facebook page before you decide to jack her rent?

This raises a philosophical question (and by philosophical I mean is this going come back and bite us in the … when the market cycle turns), how much revenue management is too much for our own long term good? I believe we could be driving our tenants into homeownership the instant they can qualify if we’re not more thoughtful in managing our revenue.