As the U.S. economy enters 2012, the gross government debt to GDP ratio stands near 100% (Chart 1). Nominal GDP in the fourth quarter was an estimated $15.3 trillion, approximately equal to debt outstanding by the federal government. In an exhaustive historical study of high debt level economies around the world, (National Bureau of Economic Research Working Paper No. 15639 of January 2010, Growth in the Time of Debt), Professors Kenneth Rogoff and Carmen Reinhart [Again with those two!] econometrically demonstrated that when a country’s gross government debt rises above 90% of GDP, “the median growth rates fall by one percent, and average growth falls considerably more.” This study sheds considerable light on recent developments in the United States. After suffering the most serious recession since the 1930s, the U.S. has recorded an economic growth rate of only 2.4%. Subtracting 1% from this meager expansion suggests that the economy should expand no faster than 1.4% in real terms on a trend basis going forward, which is virtually identical with the economy’s expansion in the past twelve months. 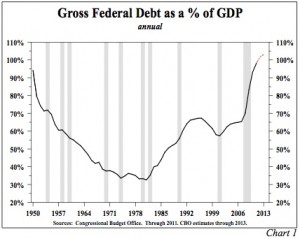 In highly indebted countries, governments have expansively taken resources from the private sector through taxing and borrowing. This leaves the private sector with less vigor to produce jobs and increase productivity, and subsequently wealth for its fellow citizens. This theory, which dates back to David Hume’s essay, Of Public Credit published in 1752, is now being played out in real time in the United States. We judge that when an economy is expanding in such a meager fashion it is exposed to an increasing frequency of recessions. We expect such a recessionary event to emerge in 2012.

Contractionary Fiscal Policy, Monetary Policy, Recession in 2012 [again], Weakened Consumer, Capital Spending Cutback, One Continuous Slump and the Treasury Market are all explored… And with the exception of long term treasuries, none of these look positive in their view.

On the other hand (as the economists like to say), for long term value investors falling prices plus low interest rates = buying opportunity, especially for residential income producing properties because everyone needs to live somewhere and fewer people want to own their home anymore.

John Mauldin reads hundreds of articles, reports, books, newsletters, etc. and each week he brings one essay from another analyst that should stimulate your thinking. John will not agree with all the essays, and some will make us uncomfortable, but the varied subject matter will offer thoughtful analysis that will challenge our minds to think Outside The Box. To subscribe go to: http://www.johnmauldin.com/subscribe