The apartment investment loan rates we track have continued their downward trend. In March the 10yr loan (details below) hit 4.92%, the highest its been since February 2014, and has drifted lower since coming in at 4.48% this week. That and the ULI <60LTV loan have been following the benchmark 10yr Treasury (T10) down over the same period while the T10-10yr apartment rate spread has been fairly steady in the 2.25-2.39 range. 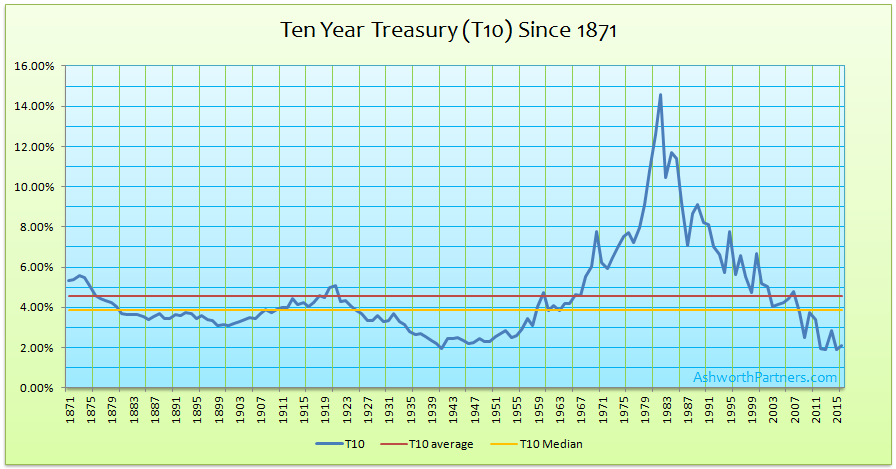 The T10 got pretty low during the Great Depression, hitting 1.95% in 1941 (on an annual basis, for the loan rate chart above we track daily T10 rates). After hitting a high of 5.87 in 1873 it wasn’t until 1969 that the rate was ever higher. Now we’ve recently hit all time lows and I wonder if the Great Recession will have a second leg down like the Depression in the late 30s/early 40s when the Fed tightened too much, too soon.

One other thing that stands out on that chart is that if your career started in the 1980s rates have been falling your entire working life while conversely if you started in the late 1930s rates went up your whole career. If your career did start in the 80s and are still working (like yours truly) you’ve seen both the highest and lowest 10T rates ever.

How the St. Louis Fed calculates the 10 year Treasury rate displayed above: “Treasury Yield Curve Rates. These rates are commonly referred to as “Constant Maturity Treasury” rates, or CMTs. Yields are interpolated by the Treasury from the daily yield curve. This curve, which relates the yield on a security to its time to maturity is based on the closing market bid yields on actively traded Treasury securities in the over-the-counter market. These market yields are calculated from composites of quotations obtained by the Federal Reserve Bank of New York. The yield values are read from the yield curve at fixed maturities, currently 1, 3 and 6 months and 1, 2, 3, 5, 7, 10, 20, and 30 years. This method provides a yield for a 10 year maturity, for example, even if no outstanding security has exactly 10 years remaining to maturity.” For even more detail see: http://www.treasury.gov/resource-center/data-chart-center/interest-rates/Pages/yieldmethod.aspx