The 10 year apartment investment loan rate we track eased 5 basis points (bp) this week to come in at 4.53%. Both it and the benchmark 10yr Treasury (T10) had been rising since early September and the apartment rate had gotten as high as 4.58% last week before backing off this week.

Despite so many predictions of rising rates we can see that since the election almost a year ago the T10 and the apartment rate have been in a flat to slightly downward trend. Anyone who was alive during the double digit rates of the seventies and eighties has it almost hardwired in their mind that rates must go back up, right? But with slowing population growth, plunging workforce participation and modest productivity growth it’s hard to see what the drivers of inflation and therefore rates would be. Add on banks getting out of business lending, the perverse incentives for corporations to buy back stock instead of investing in plant, equipment or people and falling commodity prices and it isn’t too surprising that economic growth and inflation remain muted.

Viewed historically we get a different picture: 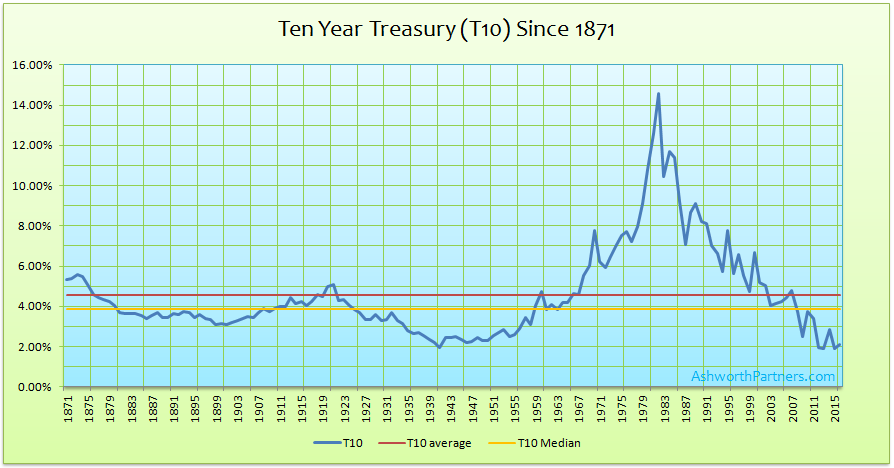 We can see that the T10 median is less than 4% which means that it has been below that point for half of its existence. Recency bias (if we can call the last 35 years or so ‘recent’) must be a play in the minds of those who constantly predict higher rates. The fact of the matter is that we’re just 150bp below the median which granted is near the historical lows but if we were to take out the one super inflationary period starting in the late seventies think how low the median would be.

Unfortunately the ULI <60 LTV rate has gone AWOL again and access to the data is beyond the budget of my posting it for free on here. The good news is that next month I will debut a new feature which is tracking the 10-2 spread, the difference between the T10 and the T2 which historically has been very predictive of moves in the economy. Here’s a sneak peak of the chart and next month we’ll dive into the whys, wherefores and what it’s telling us now:

The other rate we track is the from the Trepp survey which the ULI (Urban Land Institute) reports on. According to the ULI the Trepp rate is what large institutional borrowers could expect to pay on a 10 year fixed rate, less than 60% LTV loan for a “crème de la crème” core property located in a gateway market. We track this rate as a barometer of what the largest lenders are offering their best customers on the most secure loans for any advanced warning about future rate changes. Note that the spread we chart is between 10yr apartment loan we track and the T10.