A MacArthur Foundation survey conducted by Hart Research Associates shows that 70% of Americans polled think that the housing crises isn’t over and 19% think the worst is yet to come, good for apartment building investment I believe. As reported by the Wall St. Journal in an article titled: Allure of Homeownership Slumps Amid Worries of Continued Crisis  the worst is yet to come figure is unchanged from last year, which may reflect a segment of the population that has been deeply scarred by collapse of the lending and housing bubbles. The still in the crises figure is down from 77% a year ago but it is still a big number that’s having a positive effect on apartment demand: 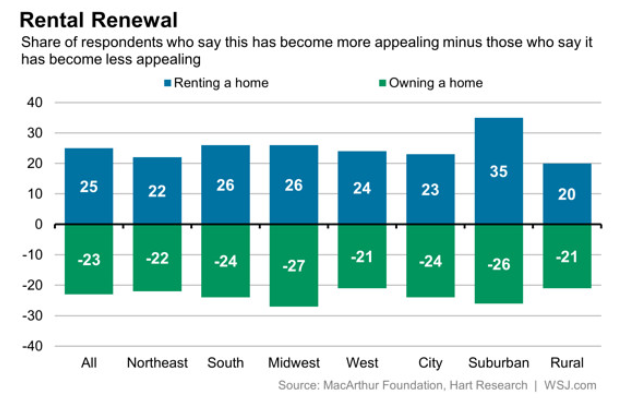 Referencing the chart above, the article stated that 51% of those polled said renting was more appealing than in past decades which is definitely positive for apartment building investors. Note that while urban apartment demand and development has been getting a lot of action, 35% of suburbanites think renting is more appealing. This lines up with moves large institutional multifamily investors are making recently with value add suburban deals. For more on the suburban apartment trends see: Blackstone Hunts for Apartments in Latest Rental Foray on Bloomberg.

The survey also asked about the deductibility of interest expenses on 2nd homes and homes worth more than $500,000. Overall a majority favor eliminating the tax break by a slim margin but when broken out into different geographical areas some surprising results show up; see the article for the chart and discussion on that as well as how appealing homeownership is among different groups.