Apartment building investment broker ABI Multifamily’s Research Director, Thomas M. Brophy is out with part 1 of a pretty in-depth ‘overview’ of water rights in Arizona this week (Part 1 of 3). This is important not just because most of AZ is a desert (duh) but because Phoenix is expected to grow by the size of Denver over the next twenty-five years (See Phoenix population to add 2.6 million by 2040, housing supply not keeping up). They’re going to need a lot more apartments but  the biggest limiting factor will be the ability to provide water for that many new tenants.

Brophy begins with the background so that as the story unfolds we will understand how things got to be the way they are, and most importantly, how to make sure your residents aren’t walking to the town well every morning with a big jug on their heads. Not light reading but it just might give you an edge- See part 1 here: The Motions, Notions and Commotions of Water!  Part 1: Arizona Water, an Overview.

Fannie Mae launched their Energy Star program for apartment building investors by releasing their study on utility use. The report, called Transforming Multifamily Housing: Fannie Mae’s Green Initiative and ENERGY STAR for Multifamily (PDF). It’s loaded with great info on reducing energy and water use as well as stats on use broken up by unit, square foot and region. They also talk about their Green Preservation Plus loans which combined with certified Green Buildings they have financed $130 million in loans on as of Q1 2014. But let’s cut to the chase, key findings [Emphasis mine]:

Clearly reducing common area utility costs and getting tenants to pay for their own use are the two of the best ways to improve Net Operating Income (NOI) and they have a nice graphic showing  just how to do that:

While the ULI rate works its way south, it seems like 4.5% is the hard boundary for the END_OF_DOCUMENT_TOKEN_TO_BE_REPLACED 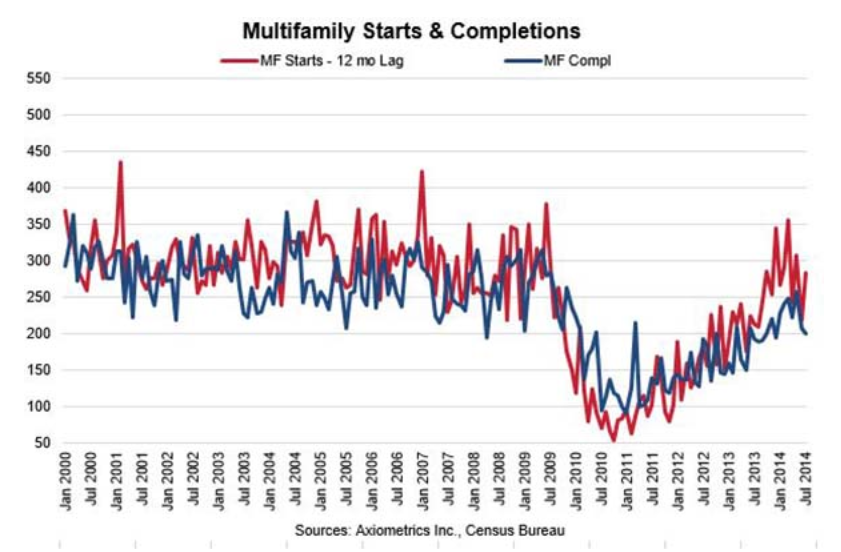 Why lagged 1 year? Because “the Census Bureau’s average length of time from start to completion for projects with 20 or more units was END_OF_DOCUMENT_TOKEN_TO_BE_REPLACED