The 10 year apartment investment loan rate we track has been following the T10 (10yr Treasury) lower since we reported on them last month. The T10 has fallen from 2.51% to 2.28 and the apartment rate from 4.92% to 4.7. The Treasury is back to a level last seen in November just after the election but due to a widening spread (green bars) the apartment loan has yet to retrace its steps past February.

Before we spend much time trying to parse the tea leaves too finely though it’s good to keep in mind that for apartment investors rates are still very low. Here’s a chart of the T10 from 1980 through March this year, courtesy of our friends at Evergreen Gavekal: 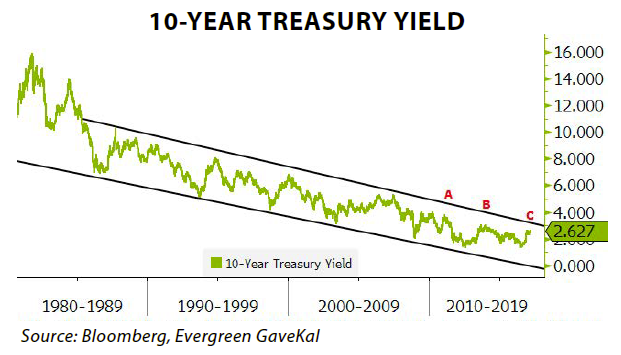 We track the 10 year Treasury (T10) because that is the benchmark most lenders base their long term rates on. In order to lure investors away from Treasuries to buy mortgage bonds lenders have to offer a premium (AKA ‘spread’) over what can be earned on the ‘risk free’ Treasury. So when the T10 moves, rates on all kinds of longer term loans including on apartments tend to move also. As you can see in the chart, the spread also widens and narrows as market forces make an impact.

The other rate we track is the from the Trepp survey which the ULI (Urban Land Institute) reports on. According to the ULI the Trepp rate is what large institutional borrowers could expect to pay on a 10 year fixed rate, less than 60% LTV loan for a “crème de la crème” core property located in a gateway market. We track this rate as a barometer of what the largest lenders are offering their best customers on the most secure loans for any advanced warning about future rate changes. Note that the spread we chart is between the bank 10yr loan we track and the T10.